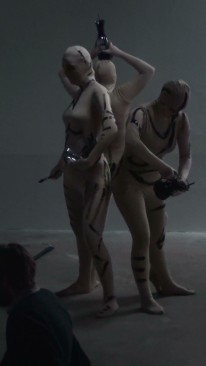 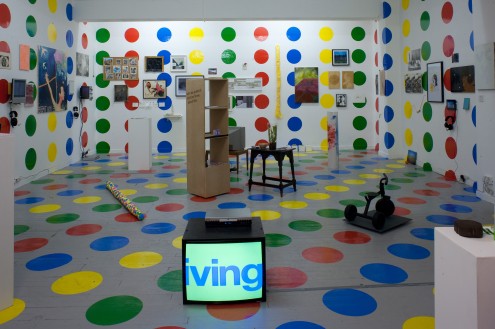 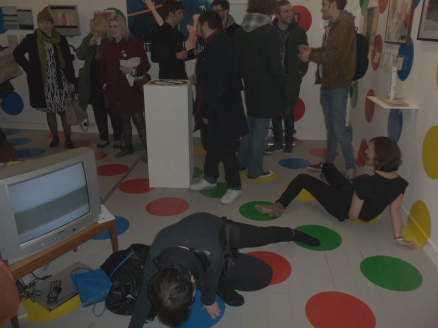 They Made a Three Headed Monster // Image for the online Castling Billboard,  a collaborative project between artists in the form of a billboard exchange between artists from the greater Glasgow area and Birmingham. Artists were invited to create a ‘pasting’ which would respond to the last days posting. Each day you could only see one image and could not click back to see the previous. Glasgow International Festival of Visual Art, 2012

Wish You Were Here!   // A6 Postcard. The Royal Standard’s Service Provider. Liverpool Biennial, 2012

COME ON LIVE IN ORTONANDON   // Twenty-four hours with Katie, Sophie and Anna in their mother’s home. An open invitation and the door kept unlocked. Visitors could stay for as long as they wanted. Edinburgh Annuale 2013.

A visitor memoir of the event:

“It’s been a while so I can’t really recollect what happened that night. What’s left is a reflection of my memories. I think that first of all you made me feel that I didn’t need anything else, I mean I was happy with you guys.

Hour 2. In the garden

Involuntarily I stayed on the introvert position, just observing your happiness and feeding on it. I remember I thought a few times during the night about Beckett. During the early days of his stay in Germany he wrote: “How absurd, the struggle to learn to be silent in another language!” I’m not sure why it kept coming to me. You made me kind of melt with your family, I mean with your identity insulated in your mum’s flat. Sometimes when I sit in my room I feel how self shapes itself in the form of the room. I remember I was fantasising on the form of your family’s self.

One of the reasons why I was drawn in to your project was my interest in all underground rank-and-file initiatives. I’m from Poland. In the period 1795 – 1818 my country was consequently partitioned by surrounding countries. While there was no separate Polish state at all, the idea of Polish independence was kept alive throughout the 19th century and led to Polish uprisings and other warfare against the partitioning powers. When teaching Polish language and history was forbidden we developed an underground network of education, usually at private homes. Later after the second world war during Soviet domination our intellectual life had to survive again in the underground. Often lack of means lead to radical approaches and solutions. From my perspective it makes sense to continue such traditions as a strategy for liberation. Especially nowadays when so much funding is being cut. To me your seemingly innocent event was part of that wider understood resistance.

Somehow you managed to link individual, private experiences and group experience in the way that everything appeared interesting again. I remember there was something utopian in the air, something like impression of ideal family. I know it is never like that but still I couldn’t have stopped hallucinating on that. You’re beautiful people and I hope we share experiences together one day in future in other circumstances again (not less utopian). Perhaps the thing that made it possible to link all the loose memories was your smile. It was strange to look at you, you’re so different as individuals and still have the same sublime smile.”

ORTONANDON: GO ON   // Interactive Participatory Installation. Thirty pairs of rollerblades mounted on a low rail along the entire gallery walls, a hand rail running above it, a gym bench to sit on to put rollerblades on, a pile disclaimer forms to sign. Gallery visitors could skate around the art works.

“For this exhibition, Ortonandon tilt their heads and take their starting point somewhere between group outdoor escapades and computer game based landscape representation. They have subverted the virtual into a mise-en-scene of props and propositions.” (Artnews.org) 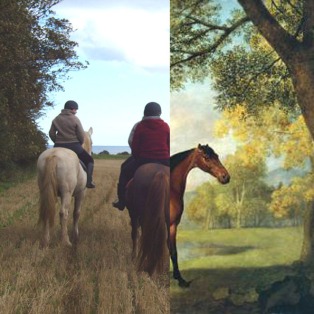 A4 black and white print to accompany commisioned text by Daniella Hughes. Click here: IT’S AN ODD PLACE TO BEGIN…

STRENGTH THROUGH JOY   // The Ortons joined the Dunlop and Mulgrew families, who all grew up together in rural Scotland, to become Strength Through Joy for a one night extravaganza indoor fête. Games and stalls were reinvented into aesthetic, nonsensical games that the public could play. Netil House Warehouse, London. 2011